Alejandro currently holds a research position as Professor at the University of Michoacan, Mexico. He holds a Master of Science in Environmental Management from The University of Nottingham (United Kingdom) and a PhD in Conservation Biology from The University of Sheffield (United Kingdom). He conducts research focused on conservation planning and management for endangered waterbirds as well as applied ecology on introduced bass populations, also working on commercial and sport fisheries ordinance. But his real passion lies in fishing from a kayak.

Alejandro started fishing from a young age, exploring mostly bass fishing in central and northern Mexico. In 2006 he started fishing from a kayak as a natural step from his fishing interest and his use of the kayak as a research tool for monitoring wetland bird populations in dense cattail areas and shallow waters. He was immediately hooked. His kayak fishing passion has triggered his involvement in several projects and achievements. He participated –for the first time in Mexico- in a fishing tournament from kayak, competing against high powered bassboats. He established HOOK1 México in 2012, the first store in Latin America to specialize in kayak fishing. Alejandro also hosted the first TV show in Latin America to feature kayak fishing, which was aired nationwide in Mexico. He is a regular contributor to fishing magazines in Mexico and the US.

He is also a ProStaff member for Kistler Rods, Yak Attack, RAM Mounts, and a member of the HOOK1 Crew. 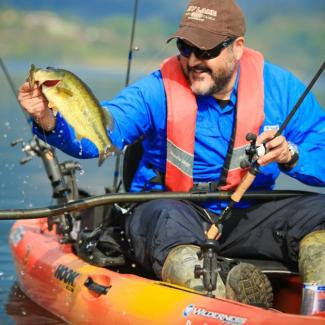