Dave grew up in up state New York and learned to fish from his dad and from a very early age would go do his own thing whenever he could. With all the local possibilities to fish Dave would jump on his bike and just go. Growing up in a family that fished, Dave has fished in many states and Canada. From a young age family summer vacations would take fishing into consideration. In the last year Dave's 78 year old dad has fished in Canada, Pennsylvania, New York, South Carolina, Ohio, Florida, Wyoming, Alaska, California and is in South Florida probably fishing right now. Dave's Dad has been featured in Fly Fishing Magazine and shows little sign of slowing down.

"I like fishing from the kayak because it's simple and I can go whenever I want (or my wife says I can) and come back when I feel like it not when other people on the boat want to be back. San Diego has much opportunity for Kayak fishing".

His favorite kayak to fish from is the Wilderness Systems Tarpon 160 so he can get through surf and have a stable ocean fishing platform. He is a successful tournament angler and contributor to Kayak Angler Magazine. The most important things in life is family (this includes his dog) and guitar. 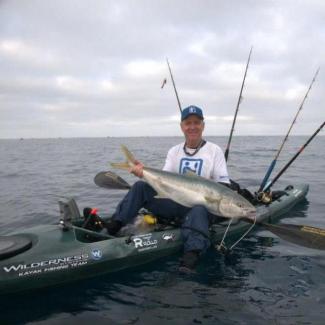