Eric is a lifelong resident of California and has been a firefighter with the California Dept. of Forestry for over 15 years. Eric grew up exploring and fishing for trout with his Dad in the creeks, rivers, and lakes of the Sierra National Forest. These fisheries are still some of his favorite spots to look for trout.

At the age of 10 he was introduced to saltwater fishing when his family relocated to Morro Bay, CA. From that time on he was hooked on the "salt". Growing up at the beach allowed him to fish the Pacific waters of Central California’s beaches, bays, jetties, and piers for a variety of species from perch and rockfish to halibut and sharks.

He was initially introduced to kayak fishing by his brother and later by his brother-in-law where he really caught the kayak fishing bug. For Eric, kayak fishing has not only become an excellent way to get offshore and target his favorite species, but has become a great way to spend time with family and friends. Already his two young boys are learning to fish from kayaks on their local bays and lakes.

“Introducing people to kayak fishing and helping new kayak anglers “learn the ropes” is fun and is important for the growth of the sport.” 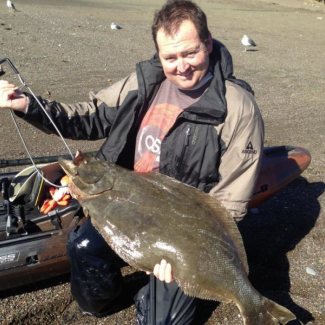