Mike Zilkowsky is an average, ordinary, everyday Alberta fisherman. Only he does it from a kayak in a province where most people fish from an expensive powerboat.

His love for fishing and kayak fishing has become his passion and he is an advocate for sustainable fishing practices and kayak fishing in Canada. He is the Tournament Director for the annual Eastslope Kayak Fishing Classic and donates proceeds raised at the tournament to the Alberta Fish and Game Association. He also organizes an annual get together of kayak anglers from his Facebook group Kayak Fishing Alberta, where everyone throws around a lot of friendly bets to out fish each other in a fun filled day near the end of the season.

Mike started fly fishing for rainbow trout in the interior lakes of British Columbia with his father/fishing mentor, Allan, before the age of 10. As he grew up his experiences in fishing took him further west to the Sunshine Coast around Sechelt and many of the inlets along the coast to fish salmon, cod and sea-run cutthroat, with his mother Linda. One of the first lessons that Mike learned as a beginner was, that to be a successful fisherman, you need to get into where the fish are….quietly! He fondly remembers the long talks from his father telling him to quit moving around and making noise in their 16 foot fibreglass canoe as they would paddle into a sedge hatch and fish in the moonlight for hungry rainbow trout.

Like most other fly fishermen, Mike made the movement to fish from a belly boat. It allowed for a new style of fly fishing and accessibility to lakes that were virtually untouched in the past. Mike moved to Alberta in 2001 and was introduces to the world of Walleye and Northern Pike fishing. Mike tried to fish these species from a belly boat but found it difficult to target the big fish on big lakes. The next natural progression for Mike was a kayak. He bought a cheap sit in kayak and it didn’t even last a single year before Mike was looking for a fishing machine. He went to a local kayak retailer and bought a green fishing machine, a Wilderness Systems Tarpon 120 Angler.

From Mike’s first paddle in his new Tarpon 120 Angler, he was hooked on sit-on-top kayaks and the Wilderness brand. He fished from his Tarpon all over Alberta and into BC catching pike, walleye, trout, goldeye, burbot and perch. Mike became involved with Aquabatics in Calgary ( a kayak retailer and instructional school) and Wilderness Systems in January of 2013 to help promote the store and help them branch into the fishing kayak industry. His kayak of choice to spearhead the movement was the Ride 135 Advanced Angler. From its maiden voyage down the chilly Bow river in April, launching into the river from  a 4 foot high ice shelf, to placing top 3 in 2 kayak fishing tournaments in 2013, the Ride 135 became Mike’s kayak of choice.

Chances are if you see Mike out on a lake or river in Alberta, he will be out trying to land his personal best Northern Pike from his kayak. You can almost be guaranteed that there will be another Wilderness Systems kayak on shore waiting to be geared up for anyone who wants to be introduced to kayak fishing.

Mike’s passion for kayak fishing has spilled over to his family and now his wife, son and dog can be found out kayak fishing with him. He even went as far as buying a child sized kayak for his family before his son was ever born.

Mike is the owner of Camo Consulting, a health and safety advising company, and Woodworking by Mike, a custom woodworking endeavour that Mike started to build kids toys and furniture. He has now started doing some custom work for kayaking and fishing such as paddle racks, rod holders and kayak stands. 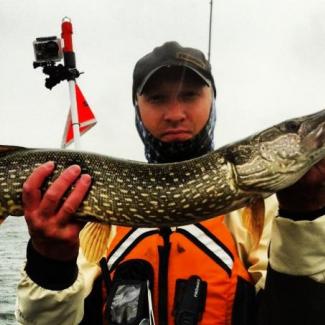