Born and raised in Chesterfield Virginia, Scott developed a passion for the outdoors early in life, enjoying time with his family on the creeks, lakes and rivers of Virginia and the shores and sounds of the Outer Banks of North Carolina.

In 2007, Scott, his wife and sons, relocated to Port Orange, FL, a move that introduced him to kayak fishing and further fueled his passion for fishing and life on the water.   By the fall, his boat was sold, replaced by a Tarpon 140.  Since then, several kayaks have come and gone, but that Tarpon 140 remains his favorite kayak, with the Commander 140 a close second.

Scott enjoys Bass fishing, but the thrill of chasing Reds, Trout, Snook and Flounder in the skinny backwaters has become his passion.  Since taking up kayak fishing, Scott has introduced many to the sport and finds no greater thrill than sharing in the excitement of someone landing their first fish from a kayak.  More often than not he says, you can see it in their eyes with that first fish – they are hooked!

Scott is an active member of New Smyrna Beach Kayak Anglers and one of the administrators for the site.  He is on the Pro Staff of Aqua Dream Living, and a member of HOOK 1 Fishing Team. 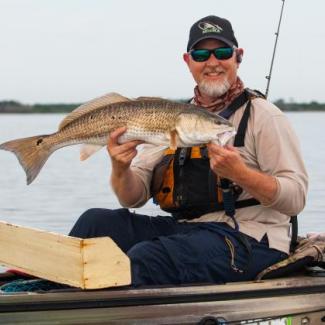