Scott Shrader grew up fishing with his family in his home state of Iowa. His father and close family friends kept that passion of fishing in him as he grew up. Trips all over Iowa and spending summers in Minnesota lakes helped. Scott and his father teamed up in tournament bass fishing throughout the Midwest for many years. Fishing slowed down as he raised three daughters, but as they grew older he found a new passion, kayak fishing. For the past five years his new passion for the sport has taken off. Scott spends most of his time either entered in tournament kayak fishing, giving talks at local sporting goods stores or just meeting people that have the same interest as him. Scott really enjoys trying out new waters, or just out enjoying the outdoors. 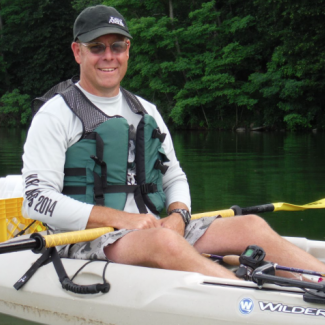