Tim Perkins calls Alabama, "The Heart of Dixie", his home. He spends a lot of time chasing trophy river bass, (Large Mouth, Coosa Spots & Red Eye) across the southeast. He held the Alabama state record for Red Eye for over two decades. Tim is a tournament competitor at the national level. He is a former Riverbassin Champion 2011. When he's not on the river competing, he's exploring new rivers with his family. Being a fourth generation river fisherman, he's very passionate about chasing rivers as well as bass! He's paddled and fished over 100 rivers over 9 states to date.

Tim is Proud to be associated with Wilderness Systems, Best Yak in the business! 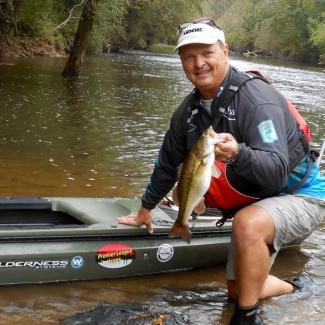