Jedediah Plunkert started fishing at a young age, riding a bicycle with a fishing rod across the handlebars to local ponds and streams around the Baltimore area. This set the stage for his ongoing fascination of exploring water and nature.  Jed worked with the U.S. Fish and Wildlife Service through their Y.C.C. program.  The conservation ethic continued with groups such as the Shenandoah & Potomac River Conservancies, Potomac River Smallmouth Club, Loudon County Wildlife Conservation and Friends of the Opequon.

Jed is a river fishing guide for Kelly’s White Fly Shop on the Shenandoah and Potomac rivers. Fishing year round, he targets a variety of species including Largemouth and Smallmouth Bass, Striped Bass, Musky, Walleye, Northern Snakehead and Crappie. He can be seen as a regular guest on The Tight Line Junkies Journal and his photos have been published in Kayak Angler and KAYAK FISH magazines.

He brings his art expertise to the fishing community through custom lure building and pouring soft plastics, tattooing and designing logos for angler themed clothing. His kayak of preference is a Wilderness Systems Ride 135. He explains, “As a fishing platform, this is my favorite kayak due to its stability and angler friendly design. I love that it has the ability to allow me stand and sight fish, but also has excellent speed.  The Ride caters perfectly to the wide range of waters I fish.” 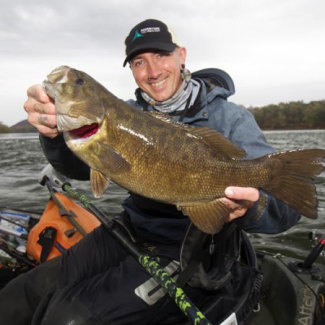