The use of the Helix PD was second nature and I used the pedals to my advantage without thought.

When I first heard that Wilderness Systems was developing a pedal system, I thought of all the advantages it could give me in my saltwater adventures.  After pedaling my Radar 135 this past year, I am happy to report that it far exceeded my expectations drifting for flounder and trolling for stripers.  I also fish sweetwater with the South Jersey Kayak Bass Fishing Club.  Our tournament lakes are relatively shallow and can be quite weedy.  I was thinking the Helix PD would be nice to have at times.  After a few times out I quickly realized this kayak and pedal system would change the way I fish!

One of the first advantages I noticed was how fast I can get going with the pedals and how effortless using them is.  Our tourneys are 6 hours long, and when I was paddling I was hesitant making long runs when fishing got tough.  After one or two trips pedaling I wasn’t afraid to take chances when the action slowed down, even if it was late in our tourney.  It was also nice to be able to fish the entire time I was changing locations.  My cast count had to at least triple with pedal power. 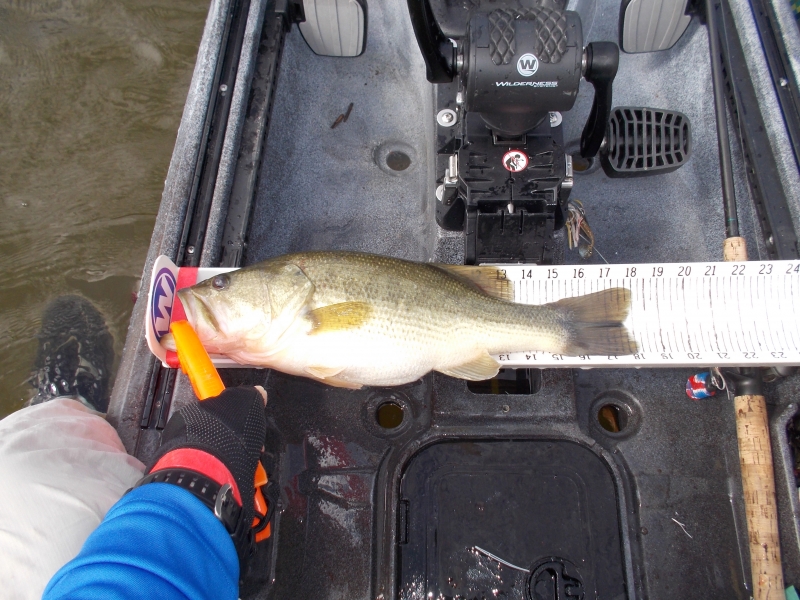 If you are like me you’ve spent more than a few afternoons watching BASS, FLW or Major League Fishing tournaments on TV.  I always envied the pros when they put their trolling motors on high and covered water, chucking crankbaits or bladed jigs, searching for active bass.  Now I can do the same thing!  The AirPro MAX seat is comfortable enough to allow pedaling at a decent speed while casting the entire time.  The Helix PD allows speed changes instantly by pedaling faster or in reverse to slow down fast.  I did learn that a little rudder adjustment goes a long way in these situations.  Too much rudder and you will be zig zagging along the bank like a snake!

One aspect that I never dreamed of was the ability to use the pedals to help fight and land bass.  There aren’t many “ledges” in our South Jersey lakes...some might be 6 feet at their deepest, so we are usually beating the banks for our bites.  I can clearly remember this revelation after skipping a T-rigged worm under some low-hanging branches.  I felt a big tug and realized quickly that I had a decent bass on.  I was using a spinning outfit with 15# braid but with an 8# flouro leader.  Almost without thinking I started pedaling backwards and this brought my bass into deeper and clearer water.  It worked like a charm!  Be warned that pedaling while fighting a bass can get tricky.  I lost one that decided boatside to dive under my kayak.  I was still pedaling slowly and cut my line.  If I would have stopped pedaling I believe I’d have caught that bass.

There are some precautions to remember.  You should be careful about pedaling fast through unknown waters.  Hitting a stump while moving fast could do some damage to your pedal system.  You will also run into some weeds even in open waters that can clog up your prop.  The Helix PD can easily be pulled up to allow cleaning.  I always carry a paddle on my Radar.  I like getting my kayak into areas that cannot be reached by bass boat.  These areas are often shallow, weeded up and narrow.  The Helix PD can be stowed forward on deck to allow paddling and does not get in the way of your deck space.  I do mount my fishfinder display on the side instead of atop the Flex Pod OS console.  I can see my screen better and it does not get in the way when stowing my pedals up.

By the end of my bass fishing tournament season, the use of the Helix PD was second nature and I used the pedals to my advantage without thought.  My WS Radar 135 with the Helix PD is, in my humble opinion, the ultimate kayak fishing machine in salt or fresh waters.