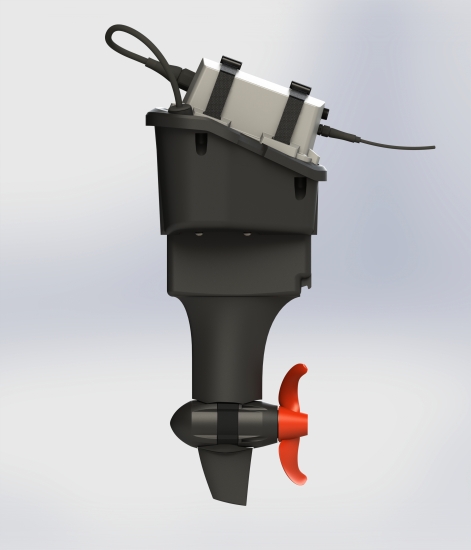 Partnering with the proven technology of Torqueedo, the new Motor Drive is a step ahead of in the world of kayak propulsion technology.

The Motor Drive pod takes kayak propulsion technology to the next level with max cruising speeds of six miles per hour, a range of roughly 20 miles, and a rechargeable lithium battery that lasts up to eight hours on a single charge. For longer range, the battery can be continuously charged with an after-market solar panel. It’s the perfect hands-free addition for anglers or recreational boaters who want to cruise the shoreline at a set speed and direction while casting or resting.

At 15 lbs., the Motor Drive, including the battery, is lightweight and comes equipped with an intelligent remote throttle that displays GPS-calculated speed, battery runtime, and battery range. The Drive allows kayakers to maintain full forward/reverse functionality with a kill switch that shuts down the motor in emergency situations. Motor Drive boasts an interlocking feature that works with the boat’s center console scupper to hold the pod in a low draft retracted position.

The self-contained, plug-and-play motor is quiet and easy to drop into compatible boats, including Wilderness System’s A.TA.K. and Thresher models as well as the Tarpon 130X to be released in Spring 2016. The Motor Drive is available in retail stores in late 2015.