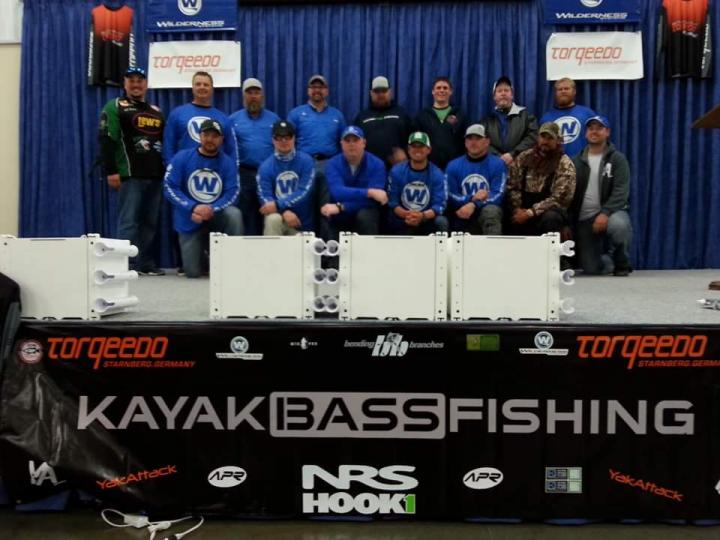 Hard lessons to learn in the world of kayak fishing tournaments.

For months I had prepared for the 2016 Kayak Bass Fishing Open and National Championship on Kentucky Lake in Paris, Tn. During the time prepping for the event I had went through all my gear, set up a new kayak, new fish finder, added more gear and countless other items on a check list. We had reserved a house at a resort for the event with other Wilderness System team members and The Anchor Wizard team. Everything seemed to be in place. I left Chicago a few days before the event in order to pre-fish the lake, and then it all changed.

I loaded all my gear into my truck and was set to leave for the seven and a half hour journey to the resort. The day I was to leave the weather changed and we now had thirty to forty mile per hour winds with sixty mile per hour gusts. I had my kayak strapped down on top of my truck, which was nearly ripped off by the wind, while still in my driveway. I had to regroup and reload the truck differently for the trip. There is a saying “Here’s your sign”, well I guess that should have been mine.

Once the truck was reloaded, I was on my way. On a stretch of highway where you could normally drive seventy-five miles per hour I was only able to go around forty-five due to the winds. This would turn a seven and a half hour trip into a nearly ten hour trip from the reduced speed. By the time I adjusted for accidents and other factors my trip time ended up being around twelve hours.

The night before the Kayak Bass Fishing Open, which was the last chance to qualify for the Kayak Bass Fishing National Championship there was an Opening Ceremony and Captains Meeting for everyone fishing the KBF Open. It was a great chance to meet some of the anglers from around the country who had made the pilgrimage to Kentucky Lake for their shot at becoming the first KBF National Champion.

That night back at the resort all of us made preparations for the coming days fishing. We prepped our poles, tied on the lures we would be using first and checked to make sure we had everything in place. Then we went over the lake maps we had and checked Navionics to scout out potential fishing spots. We were like a bee’s nest working in tandem to get everything ready for the upcoming event.

When we hit the water for the days fishing it was sunny with a slight chill in the air. It looked to be a great day on the water, and one that had potential to produce some big bass. The fishing started out slow as we had to readjust our gear due to the fact that the water was muddier and lower than we had anticipated. Once we were dialed in the fishing picked up for a while and we were able to do what we come there for, slime our kayaks with bass from one of the best lakes in the country.

By late morning the winds had picked up and we now had one foot plus waves that were white capping at some points. Everything had changed. As we were fishing we had to constantly maintain control of our kayaks in order to stay in line with the shoreline. On Kentucky Lake there is very little underwater structure as far as trees and so on, so you have to fish holes, ledges and points to increase your chances of landing those lunker sized fish.

However the wind was fighting us the rest of the day. We would paddle up to an area and then float back, casting along the way. We were able to cover a lot of water this way, but at some points had waves breaking over the side of our kayaks from the wind gusts. It shut down the fishing but we fought on for the remainder of the day.

That evening back at the Henry County Fairgrounds the KBF hosted the ceremony for the KBF OPEN winners, as well as other prizes awarded that day. We had all qualified for the Kayak Bass Fishing National Championship and would be joining the rest of the field for a shot at becoming the first KBF National Champion that weekend.

That night when I went to register for the National Championship is when it all changed. I signed into the website that the KBF uses to register for tournaments in order to complete my final registration. It was just after eleven o’clock at night and I thought I had until midnight to do so. I went to pay my registration fees and there was no option to! I immediately contacted one of the people who runs the site and asked him if there was an issue with the system or if it was set on Eastern Standard Time, as we were in Central Standard Time as I may have missed it then.

He looked into it, and after fifteen minutes of communication we were able to figure out that the registration had locked out at ten o’clock not midnight as I had thought. He then told me to be at the Captains Meeting at six in the morning and we could take of it then. So I set my alarm clock on my phone for five o’clock and went to bed. What I didn’t realize is my phone was on silent.

The rest of the guys in my house didn’t know at this point what was going on, as they were in bed. So when the morning came, I never heard my alarm and they had already left early for a different fishing location. When I woke up it was eight o’clock in the morning, and my shot at the Kayak Bass Fishing National Championship was over. I had missed the morning Captains Meeting and was now just a spectator to the event.

Well I will admit that I wasn’t happy at all. But when you are thrown a curve ball, you can either get hit by it or knock it out of the park. I decided that since I was at Kentucky Lake I was going to do some crappie fishing. After all it is one of the top crappie fisheries known to man. That day’s weather turned out to be worse than the day before. The winds were now just blowing a constant fifteen to twenty miles per hour with a heavy chop on the water. While paddling to spots there were one to two foot waves breaking over the front of my kayak. I did manage a few decent crappie that day, but all day long I could only think of what had happened.

Sunday, the final day of the KBF NC was one of the worse weather days in the region in a while. The temperature had dropped over night to thirty degrees and the winds were still blowing. As my roommates headed out on the water, I decided to stay back that day. I decided that after looking at the water conditions that crappie fishing would more than likely be shut down. I had all day to reflect on what lessons I had learned at this event, and what to change in the future.

Register as soon as you can for an event. Do not wait, as you may lose out as I did.
Make sure that you can hear your phone. This is something that we tend to take for granted.
Alert at least one other person that you are with as to what is going on, that way they can be a secondary alarm in the morning.
Find the light at the end of the tunnel. Even though something went terribly wrong, try to turn it into a positive situation. Make a positive memory from the experience, not a regretful one.

That night at the closing ceremonies the First Kayak Bass Fishing National Champion was announced along with the other top twenty-two anglers in the event. There was also a brand new Wilderness Systems A.T.A.K. 140 fully rigged awarded to the Heroes On the Water Big Bass Brawl winner, as well as many other prizes for different categories.

I did get to ultimately walk on to the stage that night. We took a team photo of all the Wilderness Systems Pro-Staff Team members who had attended the event. That night at the closing ceremonies as I watched my friends and many strangers cheer on the others at the event, it reminded me why we do this. Lessons learned on and off the water are ones that you can use in your everyday life.