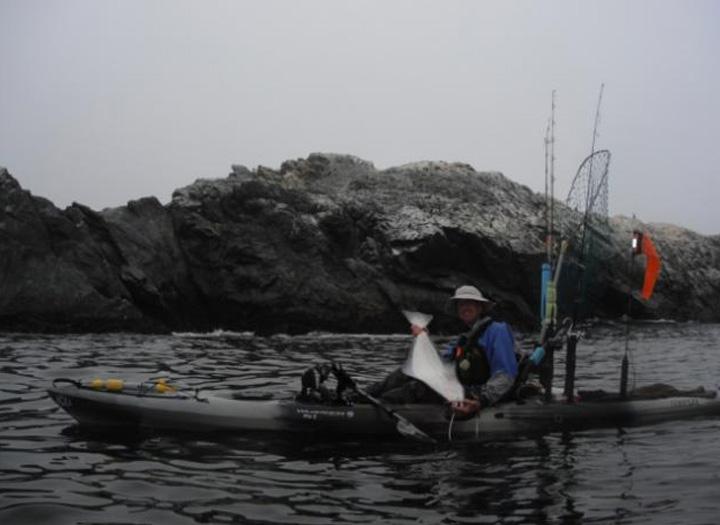 September was a big month for kayak fishing tournaments from coast to coast.

We caught up with California pro staffer Rob Knoles after coming off a win at the Trinidad Rockfish Wars 4 in Trinidad, CA on September 13th, 2014. We asked him to describe his experience and methods on getting the win - here's what he had to say:

It was a two-man team tournament. We had won two years ago and got second last year by almost nothing, so we set out to regain our title this year. We studied the points table and knew exactly what we had to do. It was a best 6-fish and minimum 3-species to qualify for check-in ... good format! Catch big Lingcod was the plan, so that is exactly what we set out to do. We knew of some uncharted underwater pinnacles from past events, so that's where we headed first. When we got there we fished hard with little success ... slow bite for sure. We caught several fish but knew we needed to step it up against the heavy competition. My partner Adam landed a nice 38.5" Ling right after I had just landed a 21" Vermilion. Now we were rolling. We had a few guys tail us for about two hours. Every time we moved they followed; they definitely knew who we were! After losing a ton of gear in an extremely peaky area, they hightailed it. I had lost 10-12 setups myself, but I knew what our goal was and kept my eye on the prize. We decided to move to a new spot since the bite from our past waypoints just wouldn't give us what we needed. Once we located some new ground we turned it on and started catching big fish! The two biggest Ling we pulled in were 38.5"/24+ lbs. and 37.5"/20+ lbs. At check-in we ended up with 4 big Lings, the Verm, and a 20" Black Rockfish. Champs again!

The next day was supposed to be a relaxing Pacific Halibut hunt. Yea right! We got a late start at 8am, as we had planned on getting underway by 6am. We set off on an open ocean paddle that was easily 5 miles just to get the lines wet. Plagued by fog and zero visibility, we had to rely on GPS navigation the entire way. Despite the conditions, my Tarpon 160 was awesome in terms of tracking and speed. We got to the hunting grounds a little over an hour later, and we had explicit "honey-do" instructions to be back on shore and ready to go home by 2pm ... not much hunting time! At 11am Adam hooked up and lost one; I had a take down and missed. Then at about 11:30am, at the bottom of the tide, I had a big take down and the clicker started screaming Wicked Tuna style! I ended up landing a nice, but small, 37.5"/20 lbs. Pac Hali. Mission complete ... almost. Adam still needed one. After pushing the clock into overtime, it was just not going to happen. At this point we had 6.5 miles to go back to shore against a 1-1.5 mph current and 5-10 mph winds. We managed to average about 3.5 mph going in, hit shore a little after 2pm, and immediately got scolded by my Adam's wife. Oops! Good thing she likes Halibut.