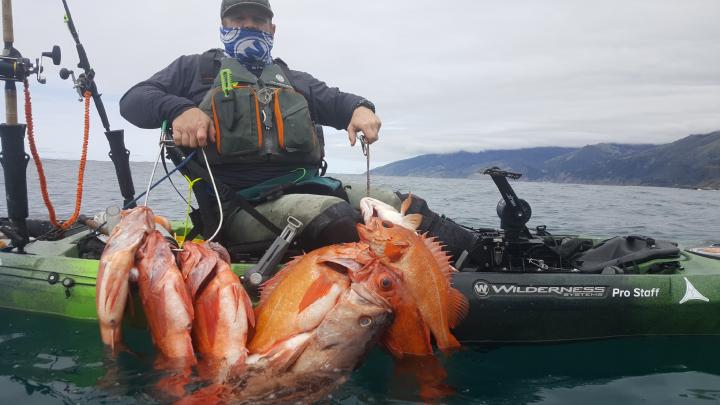 Big Sur is a remote stretch of pristine coastline between Monterey and Cambria California. Mountains rise up from the shoreline with the tops nestled in the thick pillowy clouds. 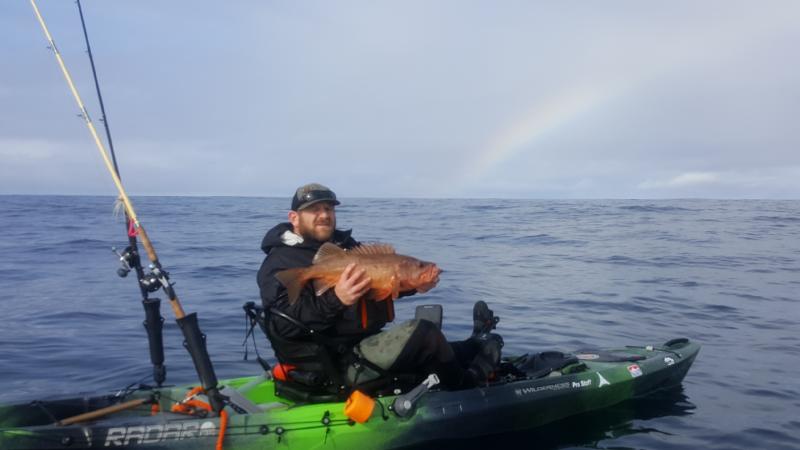 April first marks the opening of Rockfish season on the Central California Coast. Two days into the season I was lucky enough to get on the water off the coast of Big Sur for what turned out to be an epic day of fishing and early spring conditions.

Big Sur is a remote stretch of pristine coastline between Monterey and Cambria California. Mountains rise up from the shoreline with the tops nestled in the thick pillowy clouds. The coast line is rocky and for the most part difficult to access except for a handful of places. My partner and I had been watching the extended weather forecast for several weeks waiting for the best day to materialize. We were fortunate to pick the day when the forecast held and provided us to make it out to the land of giants. Giant Rockfish and Lingcod that is.

After making our way to the beach, we sat and watched the sets roll in looking for the window. After several minutes I jumped on my Radar and took off, making my way out through a tight path between jagged wash rocks, with my partner not far behind me. We both made it through the suf zone and were on our way to the fishing grounds. 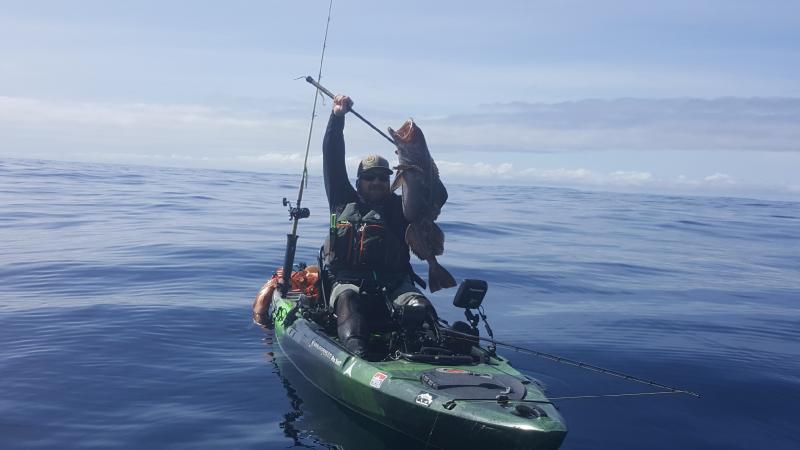 There was a bit of heavy mist and light rain falling on our way out, but the swell was small and the wind was light. Heading out straight offshore for approximately an hour and a half pedal,I was filled with anticipation of what we would find. Big Sur is a special place, with its reefs and rocky bottom safe from heavy fishing pressure due to its distance from traditional harbors and boat launches.

We made it to the spot and began fishing. Almost immediately after hitting bottom my iron was thumped hard, and as I started to reel up bang! Another thump. My rod was doubled over, and I figured I had a second fish hit my teaser hook above the iron. After a couple minutes of hard cranking I was rewarded with a giant Bocaccio rockfish and a monster Vermillion or “Red” rockfish. I had my Big Sur double! The Bocaccio and red were 25” and 23” respectively. That is huge for those rockfish. The rest of the day was filled with giant rockfish and a giant Lingcod for me. At one point my partner had a Big Sur double of his own with two big 30” Lingcod on each one of his hooks. I ended the day with a full limit of beautiful, large rockfish and two personal bests - A Lingcod taping out at 34.5” and a Bocaccio rockfish measuring 29”! I truly feel the fishing that day was worthy of being described as epic, and i think the pictures prove that. As the day went on the clouds cleared, and we were treated to an awesome rainbow, which turned out to be a pretty cool backdrop for a picture. Gray whales were also abundant on their migration north, with several coming by throughout the day with in a few hundred feet of us.

Even 5 days after the trip I am still so stoked just thinking about the epic scenery and fishing that I was lucky enough to experience that day. While Big Sur is a truly special place, it is also one to pay the utmost respect to when preparing to venture out from it’s remote shores. Good weather is a must. It is not the place to go out in questionable conditions. The remoteness and distance from help magnify the need to be dressed properly, have all necessary safety gear, and have ocean experience, including deep water self-rescue skills. Big sur is not the place for beginners or inexperienced kayak fisherman, but it is a bucket list destination and with the right weather and preparation, it is one place that the words on this page only scratch the surface in describing in allure and beauty. 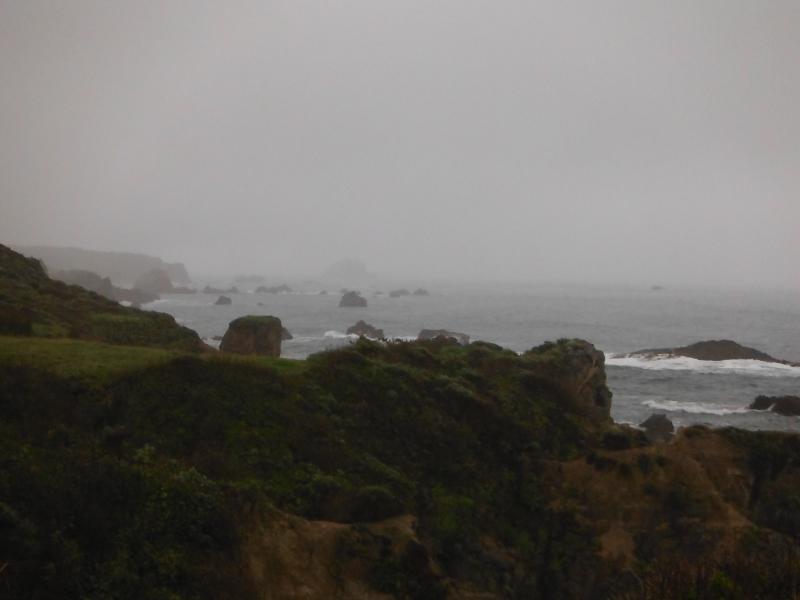 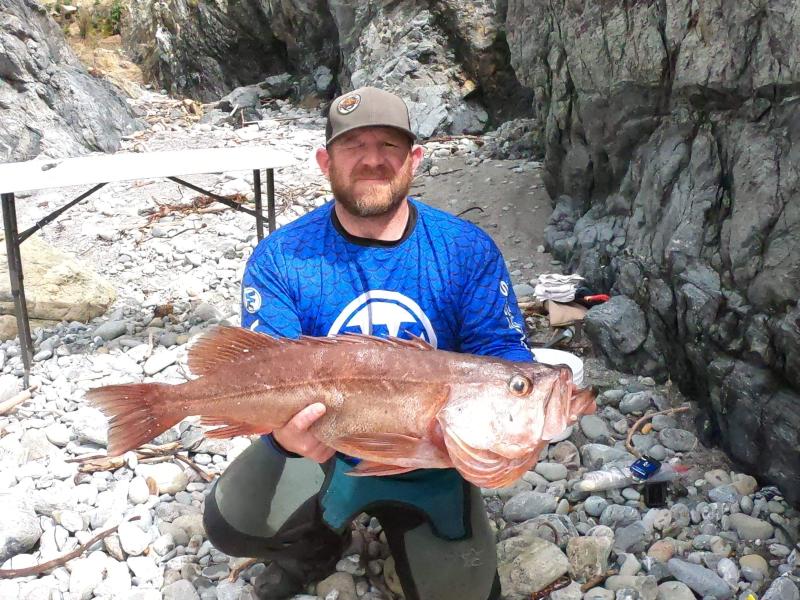 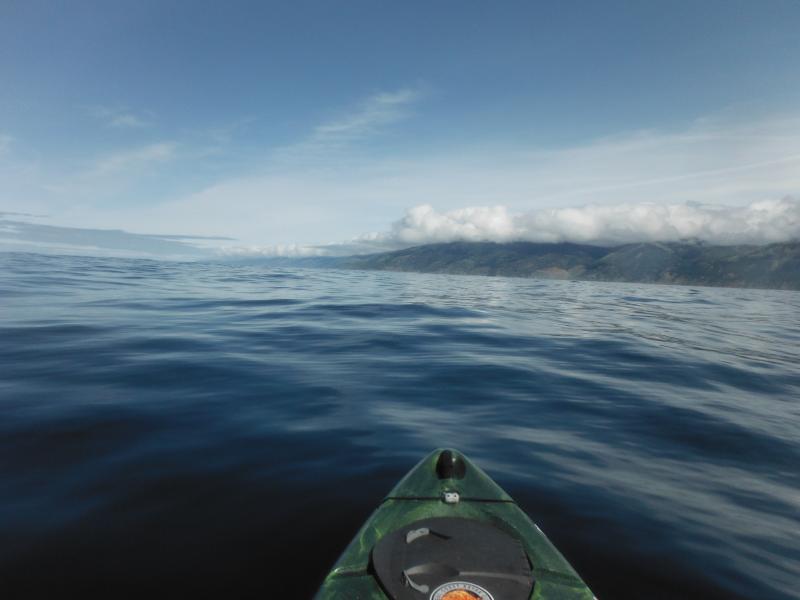