Ice Fishing In the Midwest 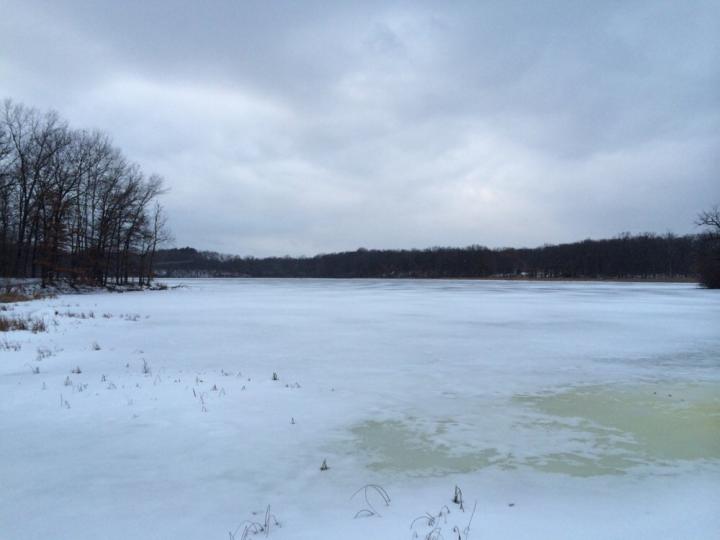 This year proved to be a difficult year for hard water anglers throughout the Midwest with the El Nino weather pattern that moved across the country. In a typical ice fishing season you can expect to be on the water by early to mid-December, this season challenged that.

By mid-December here in the Chicago area we still had open water as far as the eye could see, and were able to continue to kayak fish our usual spots. On December 23, 2015 we had a high temperature that day of 61 degrees. With temperatures still hitting highs in that range there was no ice being developed, which is unusual for our region. Luckily after that high the temperatures started to decline on a steady base for the next few weeks. However it still hovered a little too high for “safe ice” conditions.

It wasn’t until mid-January that we would have safe conditions for walking on water on a daily basis, but that wouldn’t last. The temperatures once again went back above freezing which created unsafe conditions on the ice. While we had skim and sheet ice, it was too soft to safely fish on. It wouldn’t be until the end of the month before we had rather ideal conditions across the area to be able to get out and walk on water.

By this time a lot of the areas that fish would stage in were changed due to the inconsistent weather patterns. It was a lot more drilling and searching than a normal season, and you had to put in a lot more work than a typical year. When you did find the fish, the bounty was plentiful, and the size was typically there that you were looking for.

Unfortunately the same weather pattern would hold true for the entire winter. What was safe yesterday wasn’t always safe today. This was the first year in many that I saw more “slushy” shorelines and accidents on the ice than I recall. Ranging from ice fisherman falling through the ice (pushing the limits on unsafe conditions), ATV’s and snowmobiles going through the ice and even more vehicles than usual.

One instance in particular happened on February 6th on Lake Geneva, Wisconsin. During a typical winter there would be easily twelve to eighteen inches of ice on the lake, and you could safely navigate it with a truck. However on this day fifteen vehicles fell through the ice, right by the ramp. It is a spot that people park at and attend the annual Winterfest there. It is also where you access that side of the lake from to head out. After that incident they closed that entrance and advised for no traveling on the lake.

By the middle of February fisherman in our area declared the season a loss. It was rare to find ice safe enough to navigate, as was proven yet again when two ice fisherman went thru the ice at a local tournament on an ATV. As the end of the month approached there was very little ice to be found inland and some had already ventured back out on their kayaks.

This season if you could find six to eight inches of ice, you were pretty lucky. As the fluctuating temperatures continued the ice would come and go. With the lack of snow in the area as well, there was little to no snow pack to help keep it from melting, and to help it build underneath. The snow pack factor plays a larger role than just helping with traction on the ice. It helps to insulate the ice that is there, which in turn helps build a deeper ice layer to safely navigate.

For your average ice fisherman this season taught them to be cautious and to be better prepared on the ice. You couldn’t just depend on safe ice everywhere you went. You had to go back to the basics with using you Spud Bar to tap the ice in front of you before walking on it, make sure you had your ice picks secured to your gear properly and carried an extra set of clothes with you or in your vehicle.

When ice fishing safety should be your number one priority as with any time you are on the water. Some of the safety gear you should have is:

1. Spud Bar— Used to chip away at the ice in front of you as you walk. If it doesn’t go through the ice then it is safe to navigate.
2. Ice Picks—There a lot of models on the market, but I prefer the retractable ones. These are a must have for everyone on the ice. When or if you fall in, they make the difference of you being able to get back out. They are used to pull yourself back up hand by hand. As you reach out in front of you, they dig into the ice and give you traction.
3. Ice Cleats—Even when there is snow pack on the ice these will help you navigate safely on the surface. These come in particularly handy when the snow pack is limited to none on the ice. They will help to keep you from slipping and falling while venturing to your spot. Or while running to a flag that pops up on a tip up thirty feet away.
4. Waterproof Gloves—There are several great brands on the market which are designed especially for ice fishing. These can make the difference between frost bitten hands after dipping down to grab your catch, and dry comfortable hands. Make sure to find a pair that suits your needs on the ice, as there are many types available.
5. Ice Fishing Suit—This is debated by many people on what to wear on the ice, but your best bet is a suit designed specifically for ice fishing. Many brands on the market have materials in them that help you float, and won’t retain water if you fall through. They also have re-enforced knees and elbows for times that you “slide stop” on the ice while running to a flag up.
6. Waterproof Boots—With the technology available today there are many boots that fit the needs of today’s ice fisherman. A good pair should keep your feet warm while keeping them dry as well.
7. Hand Warmers—These play many roles on the ice. Sometimes you just won’t have your gloves on, and you can keep them in your pocket to warm your hands while waiting for that next bite. They can also be used in your boots on those extra cold days.
8. Throw Rope—This is a survival necessity. If the time ever arises that someone goes through, you then have a rope that you can throw from a safe distance to help pull them out of the water and back to safe ice. While I have never had to deploy mine, I have seen it happen.

While there are many other items that should or could be carried on the ice, this list should help you be that much safer while out there. When the temperatures vary as much as they have this year and create varying ice conditions daily, safety is the first factor when venturing out. Sometimes you have to realize that today may not be the day to pursue your ice adventure, and to walk on water another day.