Springtime Striper Fishing on the Fly 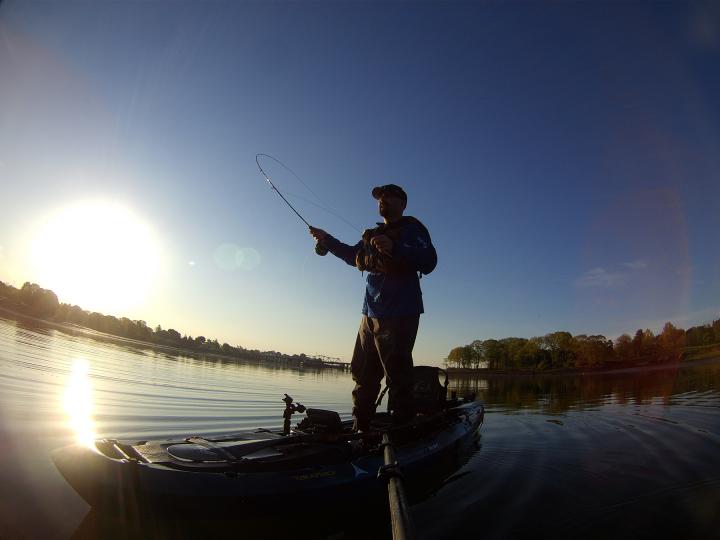 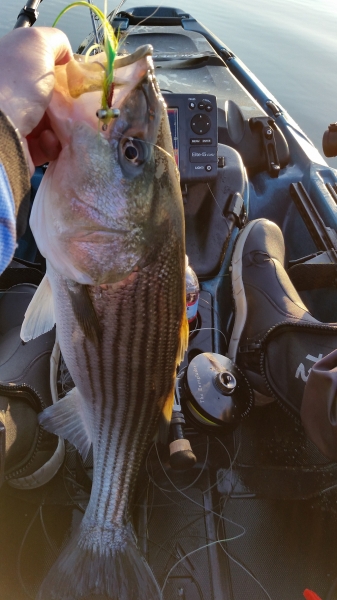 Every year around the end of the holiday season I start counting down the days until the Stripers return to our local waters. This year I started the countdown earlier than usual because I was anxious to get out in the A.T.A.K., fly rod at the ready, and start chasing the season’s first arrivals of Striped Bass.

Fresh schools of Striped Bass typically begin arriving in small numbers during the beginning of May, by the second and third weeks their numbers grow significantly as they chase schools of herring, alewives, and silversides into rivers, estuaries, and warm backwaters. This is a perfect time to target Stripers with a fly rod from a kayak.

Using a kayak as a vehicle to fish from is stealthy and highly effective. The Wilderness Systems A.T.A.K is a perfect platform to use for fly fishing because of its stability that allows the angler to stand and cast, which in turn helps the angler make more accurate casts and better presentations. The open and clutter free deck allows the line to be coiled at the anglers feet while casting, which helps reduce the number of hang-ups while casting and shooting line.

While fly fishing from a kayak I try to keep any surface mounted accessories to the bare minimum to eliminate as much as possible any object that the line could become tangled on while casting. Gear tracks are a great way to build in versatility to your kayak setup. Using Gear Tracks allows the angler to add and remove rod holders, bases, camera mounts, etc. as needed.  One of the many thoughtful features of the A.T.A.K. is that it comes with Gear Tracks preinstalled in well thought out locations around the boat making it easy to adjust configurations to accommodate a fly fishing excursion.

For early season Striped Bass I typically use an eight or nine weight fly rod with a sinking line. I also carry a second fly rod setup with an intermediate line if I am fishing shallow water or flats. I keep my leaders very simple and easy to construct. I build an eight foot leader starting with a four foot section of 40lb mono, a two foot section of either 25 or 30lb mono, ending in a two foot section of 15 or 20lb mono tippet. If I am using a bulky fly I go with the 20lb tippet, otherwise I use a 15lb tippet.

My early season fly selection consists of patterns that represent the baitfish the bass are feeding on. I typically carry some larger flies along the lines of a Lefty’s Deceiver to represent wider profile baitfish like herring and alewives, and slimmer profiled and smaller flies such as Clouser minnows and Ray’s flies to represent silversides. Even though I am a “Big Fly Big Fish” believer, the first fly I fish on any given year is always a chartreuse and white Half and Half tied on a 1/0 hook. I tie these flies about four inches long with a heavy dumbbell eye and have always caught fish with them. Stripers can’t resist the jigging action they have during the retrieve when tied on with a loop knot. If there are fish around, they will hit the Half and Half.

Early season destinations are usually tidal rivers or backwaters. The warmer water found in these waters draw baitfish and bass during the cooler spring months. I prefer to fish these locations during hours surrounding the ebb and flood as the tide changes directions.

My first fly fishing outing this season was exactly as I had hoped. Arriving at false dawn to the last hour of the ebbing tide I began seeing indications of feeding stripers within 50 yards of the launch. I stood up and made a couple of quick false casts, and let the cast go.  After two or three quick strips the line came taught in my fingers as the first fly rod striper of the season smashed the Half and Half. It towed me around in circles as I stood in the kayak thinking about how great it was to be out on the kayak with the striper season just beginning.