Tactics for Catching Trout from a Kayak 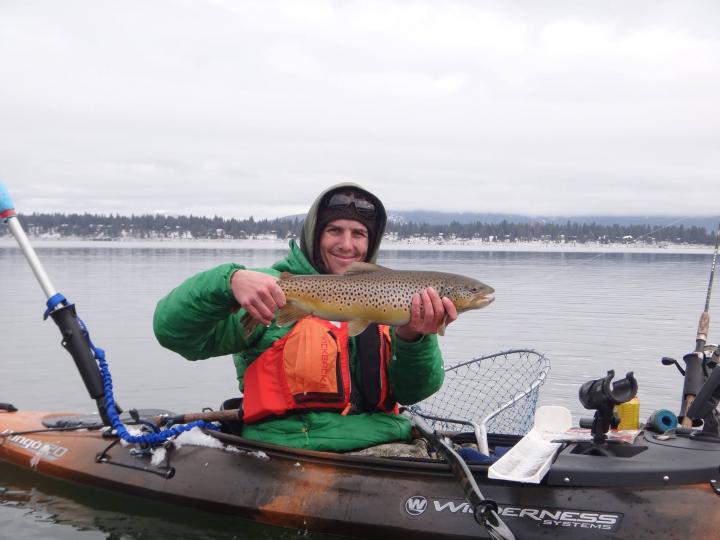 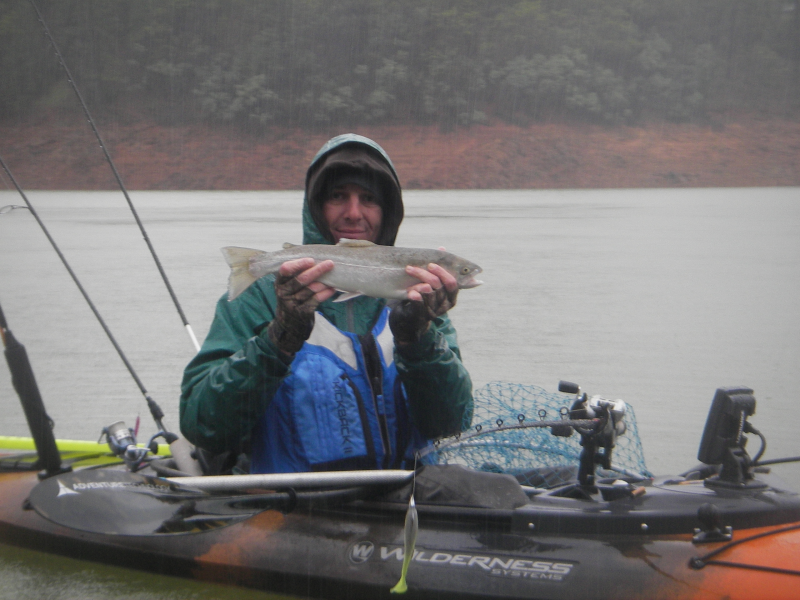 When I bought my first kayak almost ten years ago, the first place I went was to a high sierra lake in search of some trout. Since then I have fished over 150 lakes in my kayak, the majority of which I was targeting trout. Following I will share my go-to techniques and a few tips I’ve learned along the way  that hopefully will put more fish on the end of your line.

When I first started out I used what my grandpa had taught me, a set of Half-Fast flashers with a leader and a worm. I would troll this setup around the lake and yes I would catch fish, but the drag of those large flashers really took away from the fight of the fish.  I enjoy eating trout very much, but as many say "the tug is the drug" . In an effort to get more fight out the fish I began trying micro flashers and then finally finding a setup I liked. A small 4inch Seps dodger or one of the smaller tear dropped shaped ones with 7"-12" leader followed with a worm or your favorite lure or fly. 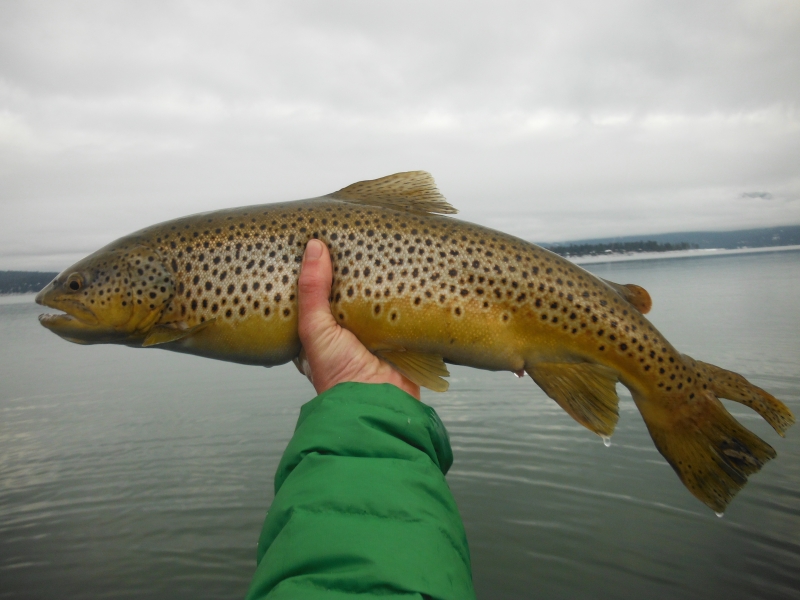 This setup has caught me hundreds if not thousands of trout.  Predominately rainbows , brooks and cutthroat but the occasional brown will fall for it as well. If the water is cool or the fish are feeding on top, trolling with this setup will work just fine without any added weight. If the fish are deep then a small banana weight can be added or as I prefer leadcore line. Speeds from 1-2mph are ideal for this setup, the fish will often follow for awhile and not hit if you are just going the same speed in a straight line. Vary the speed and do occasional zigzags to help trigger more strikes.

While on the subject of trolling I feel I have to say that my second most productive method is just hooking on a silver and blue Kastmaster or a J-5 Rapalla in rainbow trout pattern, letting out some line and trolling around. If I am trying to target German Browns then I will up the size of the Rapala and usually troll it on some leadcore near the bottom.
As well as trolling the Kastmaster it is also an amazing search bait, when just drifting around in the kayak I will kick back and toss it around. First few retrieves don’t let it sink, if no hits next few casts let it sink 5 seconds and retrieve, no hits then try 10 sec and so on, until you find where in the water column or by what type of cover/structure the fish are at. 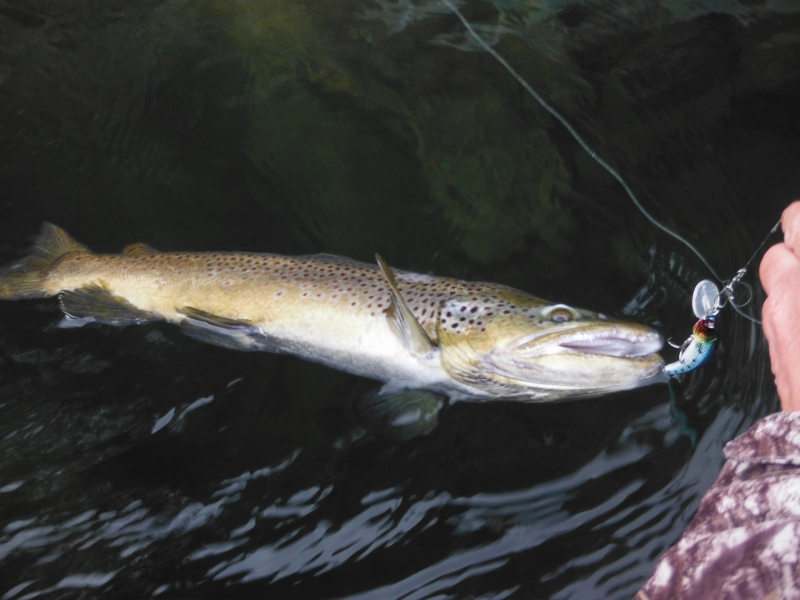 My 2nd favorite lure to cast and or troll around is the Thomas Bouyant either in red and gold or in rainbow trout pattern. The brook trout really seem to love the gold and red Bouyant.
So I covered my favorite trolling setups and lures to cast, now I will get into what has become one of, if not my favorite methods to catch all variety of trout both large and small, the jig. Jigs come in all sorts of varieties, the first I ever used for trout was a mini tube jig. The Berkley Power bait mini tubes in the grasshopper or white I keep in my box at all times. Slowly and stealthily moving my way along the shoreline I will toss the jig, let it sink for awhile then reel it in twitching here and there along the way until a hungry fish takes it. 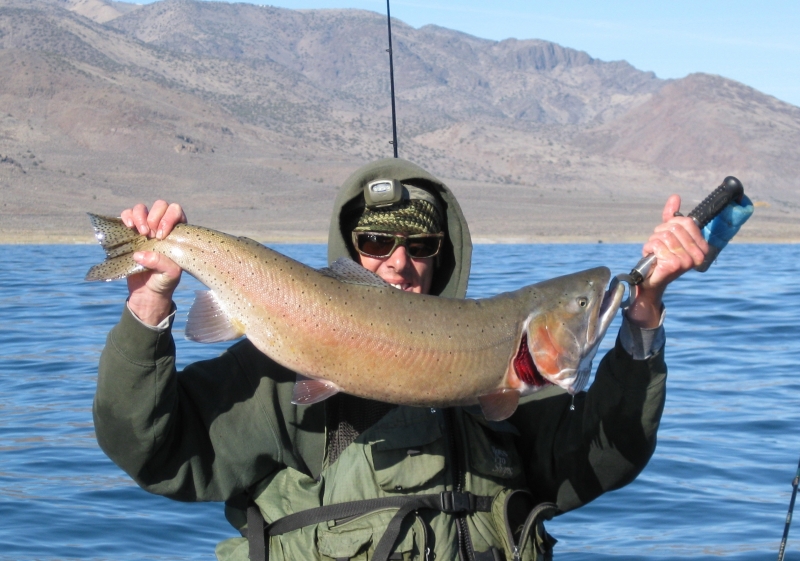 If fishing in artificial only waters you can find the small tube jigs unscented, or you can go to one of my other favorites the marabou jig. My personal best 30+inch cutthrout came on a 1/8ounce marabou jig. I fish them similar to the mini tubes, though with the little bit of extra weight I am able to feel the bottom better and able to hop it along the rocks. I’ve caught Golden trout, German browns ,Steelhead, Brook trout, cutthroats, rainbows and even a tiger trout on marabou jigs so don’t be hesitant to try them in any body of water!
There are many different ways to target trout from the kayak so try out a few different techniques and see which is most productive and most enjoyable for you. No way is the right way or the only way, sometimes you may have to try a few different things before you figure out what the fish are in the mood for that day. 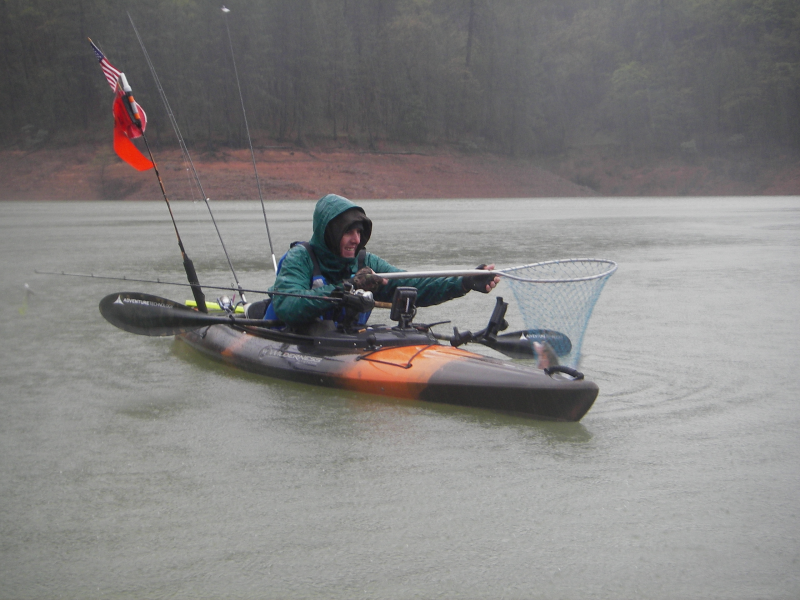