The Ways of the Weakfish 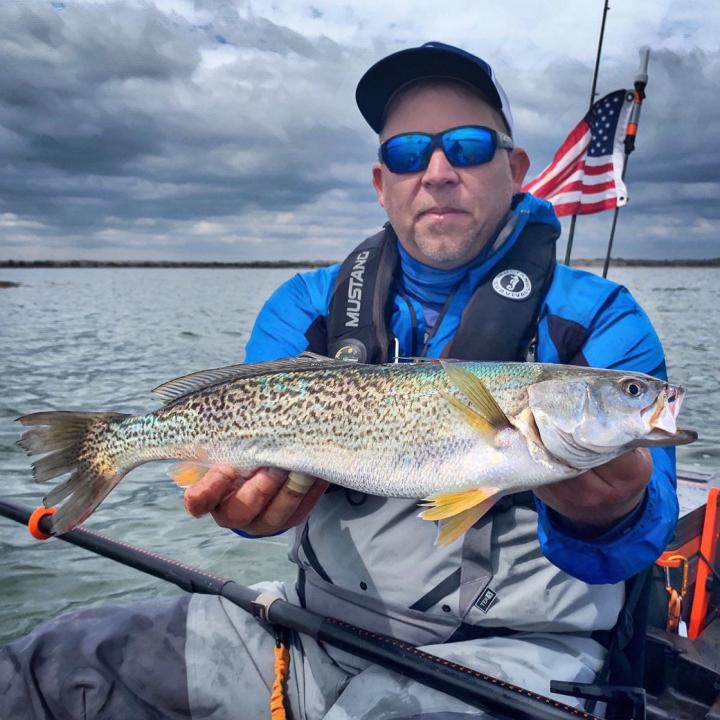 The Ways of the Weakfish
By Frank Ruczynski

It’s spring in the northeast and with it comes some of the best fishing opportunities of the year. While hefty striped bass and slammer bluefish grab the spotlight, it’s the trophy tiderunner weakfish that get my attention. There’s something about those back bay beauties and those drag-burning head shakes that’s got me hooked! 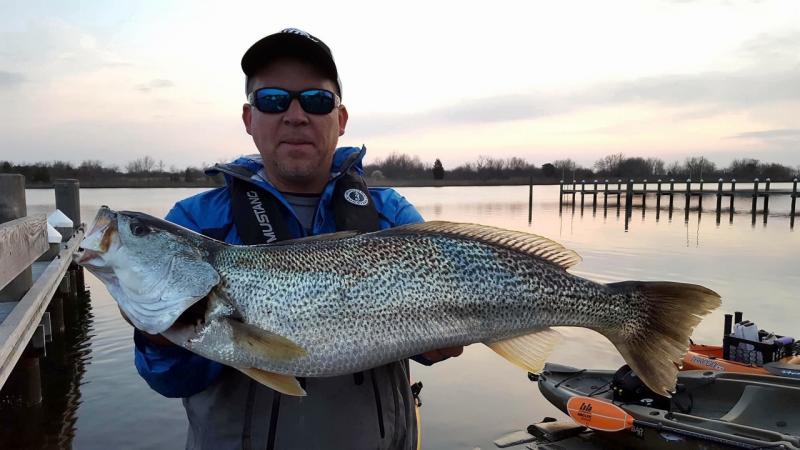 In New Jersey, our window for trophy weakfish is relatively small: from mid April to early June. The run can begin or end a little earlier or later each season, but if you’re serious about catching big weakies, make sure to circle the month of May on your calendar.

Growing up, I can remember catching weakfish all day everyday from late April until October each year. As the years passed, it became more difficult to find any real numbers of weakfish as access to certain areas was lost which resulted in the few areas left to become overcrowded. To top it off, those great runs of weakfish we experienced were over and the fishery was in a sharp decline.

With less fish around and fewer areas to fish, as a land-based angler there was only one answer: I needed a kayak to expand my options and find weakfish in areas others were not fishing. I demoed a bunch of different kayaks and fell in love with a Wilderness Systems Tarpon 120. Little did I know how much kayak fishing would open a whole new world of fishing opportunities and experiences. I now have a small fleet of Wilderness Systems kayaks including a Radar 135, ATAK 120 and ATAK 140.

During the next offseason, I studied nautical charts with plans to explore new areas in hopes of finding trophy tiderunners. Weakfish are much like other species and tend to be found wherever there are large amounts of food sources. Creeks mouths, shell beds, rock piles, docks and bridges are some of the best places to find feeding zones. Large shallow bays that bottleneck into a deep channel are prime areas, especially during an outgoing tide. 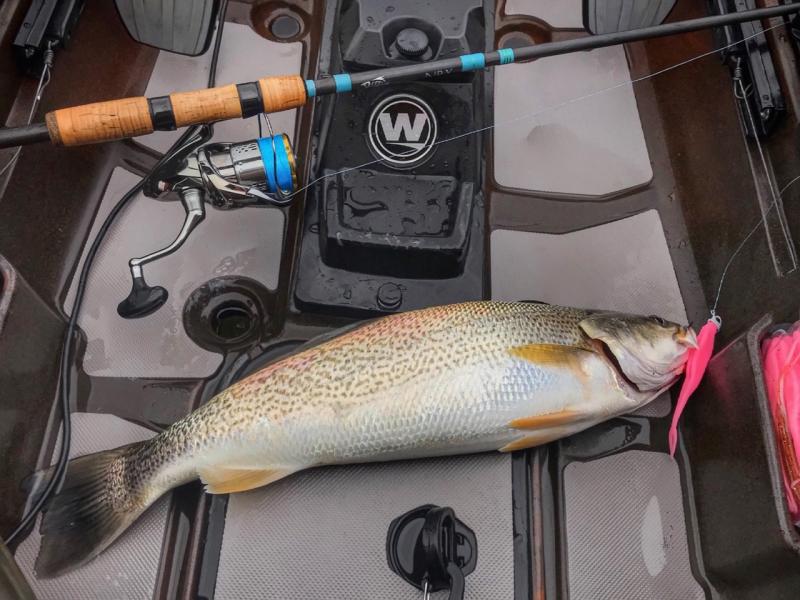 Going into the spring season, I found my new kayak to be the perfect solution to finding more weakfish. The little stretches I could work from land were expanded a thousand times. The stealth of a kayak also had some real advantages over a boat with an outboard motor. Weakfish are known to be fickle and often shutdown due to motor boats. Another big advantage was being able to launch my kayak from just about anywhere. While others are waiting in line and paying ramp fees, I’m out on the water with a bent rod.

You only need one bait to catch weakfish: a bubblegum-colored Zoom Super Fluke. There’s something about the darting/gliding action that they just can’t resist. I rig my soft plastic Zoom baits upside down on 1/4 to 3/4 ounce lead head jigs, preferably with a big eye on the jig. By rigging the Super Fluke upside down, I’ve found having less of the Zoom attached to the hook allows the soft plastic bait to move more freely on the jig head hook which gives the bait a better action. I also sweeten the offering with a little fish attractant juice. I prefer shedder crab oil made by FIN-Essence. I marinate the Zoom Super Flukes with a few drops of “the juice” and it’s game over.

Presentation is key in most types of fishing. I’ve notice this even more so while targeting weakfish. Presenting a bait in such a matter that it will trigger a strike is the name of the game. After years of fishing for weakfish, I’ve found that “the swing” often triggers the most hits. Here comes the technical stuff. “The swing” as I refer to it is the moment the current starts lifting and pulling the jig away from you. I learned about this technique years ago while wading for weakfish. The best way for me to describe it is as a window in which weakfish will strike. Throwing your bait into the window wasn’t always good enough, the weakies needed a little more to trigger a strike. The swing was the key to trigger the strike. I could make adjustments when wading, but those adjustments were limited by water depth, other anglers and structure. Those limitations were removed by my kayak. I can position my kayak in the best possible location allowing my offering to spend longer periods in the strike window. After a few successful trips in my kayak, in which I outfished my wading buddies, many of my wading friends soon became my kayak friends.