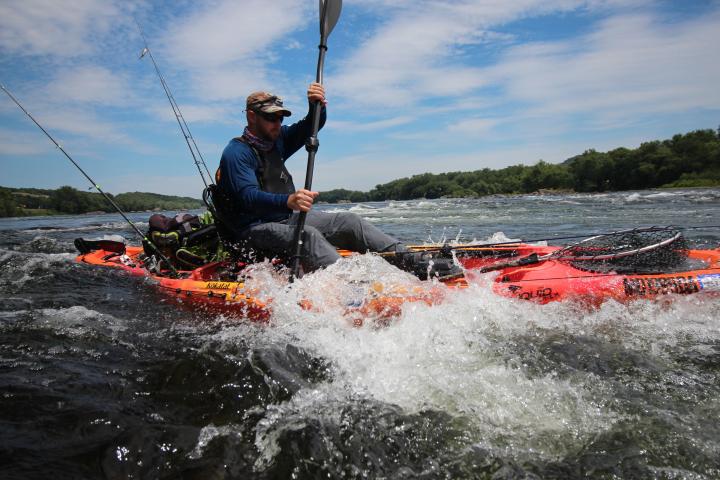 What's more impressive is that in doing so, they've created a boat that an angler can use in multiple fisheries, in multiple configurations.

In the early 2000's, when paddlesport companies were just starting to understand the relevance of kayak fishing, “Pro Staff” wasn't a term. We worked alongside regional sales staff at outdoor shows, assisted customers at paddle shop demo days, promoted the growth of the sport with fishing club speaking engagements, and participated in fishing message forums. We were ambassadors to a fledgling sport.

Our role has grown considerably as the sport has become more developed, specialized and popular in new regional markets. We used to simply be marketing agents of recreational kayaks used for fishing. But in the last six years as a member of the Wilderness Systems Kayak Fishing Pro Staff, I've had the opportunity to influence the design of future kayaks and accessories. Here's the timeline of my involvement in the development of the new Wilderness Systems Radar, the brand’s first and coveted tri-powered kayak, scheduled to launch in early 2017. 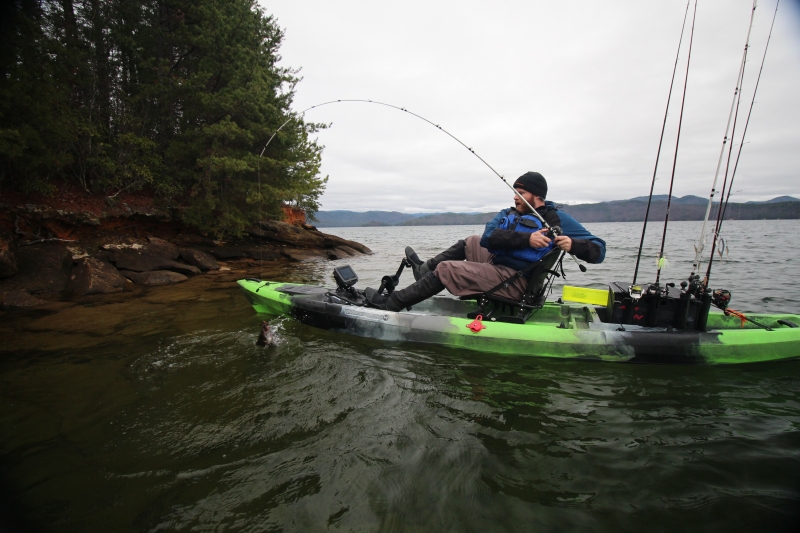 Sometime in the summer of 2015, I received an email with CAD drawings attached of a fishing kayak with the understanding that it would be a boat you could stand in, and that it would be built around a pedal drive unit. Beyond that, it was a fairly feature sparse layout. A private Facebook group was established that included a handful of Pro Staff, Product Developers and the Engineers who helped make sure the ideas we had found a path to become reality.

That early stage makes it seem like our products are the result of collaboration of a small group of people. That's not the case at all. We have no “Signature Series” boats that are the brainchild of an individual. Putting all your eggs in the basket of one person's ideas is short sighted. Involving as many anglers in as many different types of fisheries as possible brings a heavy price tag in terms of financial and time investment, but that formula has worked with fishing kayaks like the A.T.A.K. 140, Thresher and Tarpon 130X. The Radar would be no different.

In November of 2015, I received the first of three prototypes of the Radar 135. Sometime after, fellow pro staffer and regional manager Bobby Clark received a prototype of the Radar 115. He was one of the first to test the pedal drive unit, and that accessory’s development timeline is another story altogether. When I took delivery of the first Radar 135 prototype, I was asked to assess its fishing and paddling performance without the pedal drive as Wilderness Systems kayak designs have a heritage in sea kayaking and overall paddle-ability. That in and of itself is one of our main competitive advantages.

I was eager to pedal the kayak, but understood the value of assessing the boat's paddling ability. Kayak fishing had yet to produce a kayak that has a hull that glides easily enough to be paddled all day. Pedals have been a powerful way to compensate for a kayak that was heavy or pushed water instead of sliced through it. The Wilderness Systems Radar sought to crack this code.

The first stop for that first Radar prototype was the Susquehanna River. I tested its standing stability while drifting upright through a pool where smallmouth gather over winter. Hooking a big bass, fighting it to the kayak and netting it all while standing requires a stable platform. A mis-step with water temperatures in the mid 40's would result in a dunking certain to induce hypothermia. I felt stable. 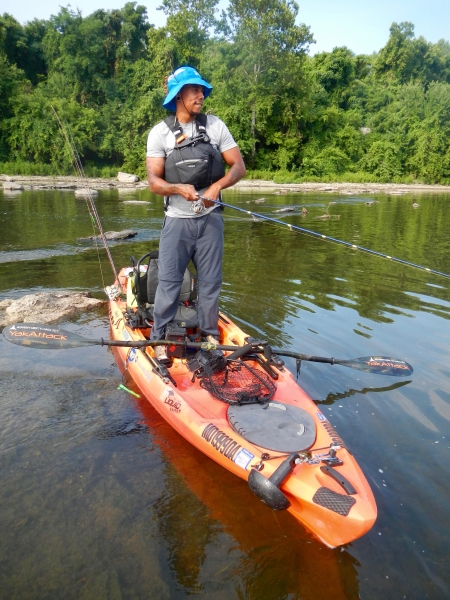 I also got a feel for the kayak's speed, maneuverability, gear storage capacity and ease of transport. It's a long and fairly wide boat, but car topping it seemed easier than the A.T.A.K. 140 I was used to. On the water, I charged through a wave train and anticipated a wave of water to wash over my legs. Instead, the choppy whitewater was tossed back.

On a later trip in particularly windy conditions, I made note of the boat's bow being pushed more than I would like. With bow volume and height, there's a balance between wind resistance and a dry ride. I also noted that there was nowhere for me to put smaller pieces of gear like pliers, jig heads or a tube of scent. Each detail that I found missing, or that I would like to have changed, were recorded and relayed to the product developers at Wilderness Systems. I also made detailed notes and illustrations on ideas for accessories that would complement the boat. Along the way, I was able to put other Wilderness Systems pros in the kayak and get their feedback as well.

Into December, I set up trolling rod holders on the Radar and put the Helix MD™ Motor Drive in the Flex Pod OS scupper. Utilizing a second method of propulsion allowed me to cover a lot of water on the Chesapeake looking for striped bass. Just as the boat sliced through the water of the Susquehanna while powered, it moved equally well under the power of the Motor Drive.

In January, I brought the prototype back to where it was made: Confluence Outdoor in Greenville, South Carolina. I was also there to meet with the developers and another pro to test the Radar 135 in several different fisheries. Over the course of three days, I toured the factory, came to understand how prototypes and production boats are made, then paddled and pedaled the kayak on three different fisheries: a small mountain river with class 3 rapids, a series of ponds and a large mountain reservoir.

On the river, we learned that the number of scupper holes where the seat resides was not enough. I was bogged down from the slow speed of water sucking down through scupper holes in that area. Haystack waves on the Nolichucky River in Tennessee were higher than those I had powered through on the Susquehanna.

Product Designer David Maughan actually ripped the back end of one of the prototypes off while navigating a particularly raucous rapid. He couldn't continue the float trip, as the water was pouring into the hull as quick as a faucet on full blast. He had to hike out of the remote area at the base of the rapid with his wounded boat on his shoulder. Prototypes aren't made with the same process or materials that production boats are. Once the final design is decided on, a production mold is made, which results in a more uniform hull thickness and weight. The point is that we tested the prototypes to failure in many ways.

On the reservoir, we finally got to test the pedal drive. Watching my fellow pro staffer stomp on the pedal and see the rooster tail of water erupt from the stern of the kayak was a happy moment. He attained a speed of 5.3 miles per hour as measured on his depth finder/chart combo unit. When I got into the kayak, I noted that maintaining a speed of 4 miles per hour was easy – an effort level that could be maintained all day. I caught numerous smallmouth while testing the forward and reverse in the face of a strong cross point wind. 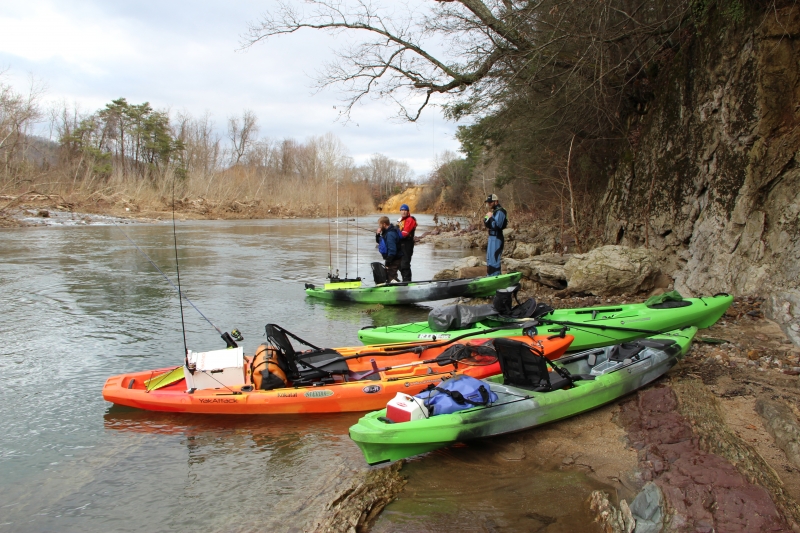 By the end of the day, I was certain that the drive had adequate power for my needs on the upper Chesapeake Bay. Still, the engineer working on the pedal drive system wanted to make adjustments to the propeller’s pitch to hit the sweet spot. My understanding is that there's a sweet spot in pedal drives that blends a quick start with the best cruising speed. Top end speed is a fun thing to achieve, but in terms of fishing usefulness, a nice cruising speed without causing your leg muscles to fatigue and an easy start is something that any angler will appreciate. With an efficient hull and a powerful drive, we had an excellent start, but multiple refinements to both the drive and boat were yet to come.

Many of those changes came out of the feedback that Bobby, myself and other pros had on the first prototypes. I got to see them come to fruition in a second prototype. The scupper holes in the midship well grew in number, the top line of the hull was trimmed a little, two gear pockets on either side of the AirPro MAX seat came in handy for smaller items, and plans were being made for a way to eliminate the induction of air through the Helix PD™ Pedal Drive scupper. I used that second prototype through the spring and summer, putting other staffers into it along the way.

By the time the Outdoor Retailer Show in Salt Lake City, Utah came around, the refinements to the pedal drive, hull and scuppers for both drive units were in place. At the OR demo day, fellow regional manager Troy Meyerhoeffer hopped on the third version prototype, lined up the balls of his feet on the pedals and launched the Radar 135 out from shore. Again, a rooster tail of water came off the stern. I hopped in one with a motor drive and we cruised the lake for a while before the buyers arrived. When coming in hot to shore, we were able to kick a button on the front of the pedal drive to bring the prop up through the scupper to prevent running aground.

On shore, David Maughan greeted us, explaining that the unit we were using wasn't the final product, and that they were still tweaking the system to make it as smooth and powerful as possible. It's apparent that the product development team knew that the entry into the pedal drive market had to be a hit. Honestly, I was happy with it as it was and wondered if the unit would fit in my suitcase for the return trip at the end of the show. 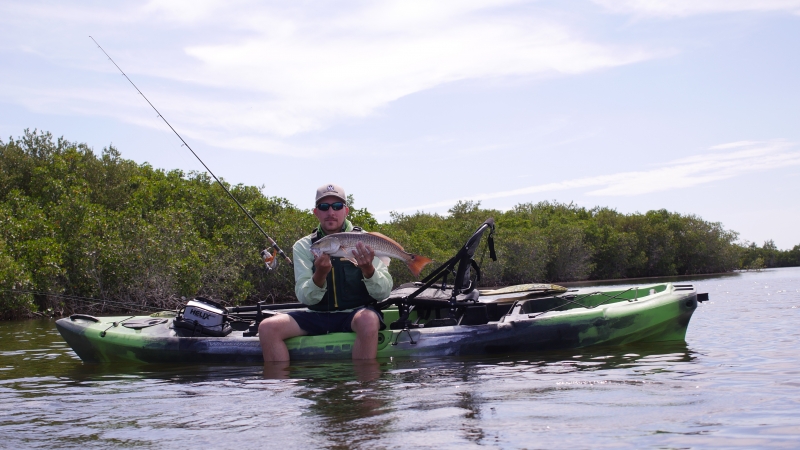