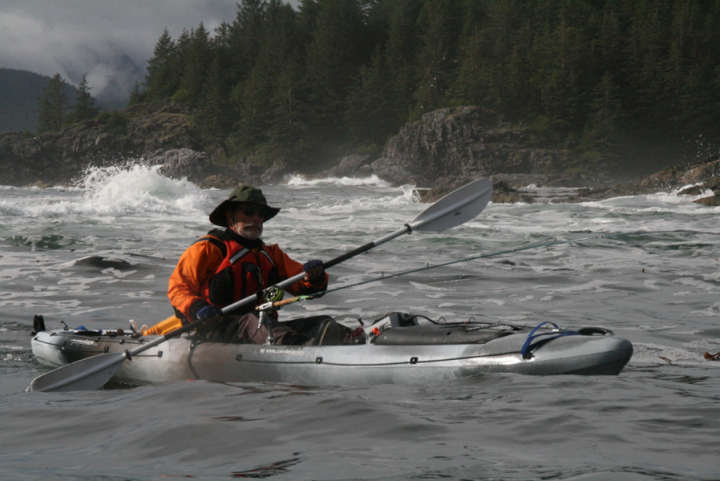 Two hands free was a revelation and for a fisherman and cameramen, it was ideal. An intelligent remote throttle using a GPS displayed the salient metrics for me: speed, remaining range and run time. It all seemed pretty sweet.

Wilderness System and Torqeedo, a German based industry leader in electric boating motor tech, hooked up to produce if not an outright wunderkind, then at the very least, a clever child.  I got wind of the Helix MD Motor Drive system in early 2017.  I had a kayak fishing project on the BC coast schedded for early that fall and it seemed like a good venue to test out the boats.  We’ve used Wilderness Systems Kayaks for years on long ocean treks and they’ve proven solid, so didn’t feel we were going too far out on a limb with the motors if they didn’t work out.  My photographer for the project was Steve Thomsen.  Come September we had a couple of Thresher HD kayaks strapped atop his Tundra and heading north from Seattle.

By noon the next day we were unloading our boats at a Government wharf in an inlet deep in the rugged coastal rainforest of Northwest Vancouver Island. Waiting for us was Richard Leo, our engaging water taxi driver from Rugged Point Lodge.  He opened up the big 250 Mercs and we shot out the inlet, then ran north over deep blue water before cutting the engines and firing up the kicker to maneuver through reef and kelp beds into a beautiful pocket cove replete with white sand beach and a tiny islet all to ourselves.

We had a week of messing with boats and very much enjoyed the process.  We motored to distant rivers and beaches to cast to salmon and trolled through our reefy and very fishy surroundings. My biggest take away from my time with these electric powered kayaks, though, was the scoot. Color me ear-to-ear grin when I pushed the throttle forward that first time, after paddling out of the cove through seaweed and rocks into open water—and felt like I’d been shot out of a cannon!

I could steer with the rudder pedals.  I stashed the paddle in a sleeve built onto the bow hatch. Two hands free was a revelation and for a fisherman and cameramen, it was ideal. An intelligent remote throttle using a GPS displayed the salient metrics for me: speed, remaining range and run time. It all seemed pretty sweet.

The bottom line for all new design systems such as this are inevitably judged against the time worn adage about trouble and worth. From day one we could see the considerable worth of what the motor provided and by the time we schlepped the boats and our pile of gear back aboard the water taxi to head home we were aware of the trouble.

Steve and I both agreed that worth won out. The practical side of scoot had us quickly fishing distant reefs or river mouths and with a new found capability to dash back to camp in face of a sudden storm.  We boated in some pretty big seas, jockeying around reef breaks and big swell trains. The boats felt very stable. I had the paddle in hand for beam seas to brace but never came close to needing it. Not only was the motor handy for trebling our strike range for exploring and fishing but it was perfect for bucktailing for salmon, our primary focus.  I could hold the rod in one hand, find the zone, relax, waiting to feel the sudden strike of a bright coho at the end of the line. And the battery will run all day on a troll like this.

But the electric kayaks were not without their troubles; most of which were situational. Launching and landing on a shallow beach requires dealing with the motor, retracting the prop. To go ashore, we had to get out of the boat and pull it up out of the pod port.  You can do this from the boat but it is difficult, and if the landing is bumpy you’ll need to secure it on deck.  It was easy enough for us in the cove but would be a pain in any kind of surf or surge.  Secondly, seaweed will shut you down in a blink, if you hit it.  This is a protective device, though, and only temporary; you can reset and start right up. Finally, we did have one battery go down (out of 4) with no field fix and later returned to the factory.

There is the issue of power management; not so much a trouble as it is intrinsic to all power sourcing, self-powered or otherwise. It means no more dragging our ride up the beach and putting her away wet, though. There is a power curve to stay ahead of. On a beach in the middle of nowhere our options were limited. We had two roll up Torqeedo solar panels and enough sun to keep us in the pink.  We also had a spare batt for each boat so we didn’t have to lay over a day while recharging (highly recommended on trips like this).  The batteries are powerful, sealed, lightweight Lith-ions that can provide enough juice to troll all day or tach out at 6mph for a little less than an hour.

In footnote to the BC trip, after returning from the coast I took the boat into a lake in the mountains where I stayed the night in a floating cabin.  There was no seaweed in the water and the boat rode like a wannabe skiff tied off to the dock with the motor in place while an AC outlet inside the cabin recharged the battery overnight.  Pretty much an optimum venue.

While the concept of a motorized kayak will be blasphemous to purists of the sport, there are fishermen and photographers and pretty much anyone who loves a little scoot that would enjoy the ride.  Like the popularity with ebikes, we’ll have to see where it all goes.  But I can well imagine a kayak cowboy in SoCal pushing off a dock in the early AM to a gorgeous Laguna morning sunrise with a Double Caffè Macchiato in one hand and waving at the other kayakers as he passes them by.